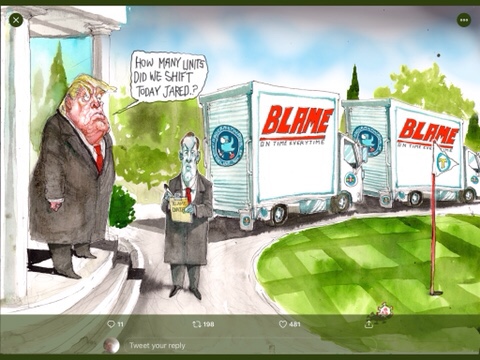 Like on the farm you just have to accept animals do what they do as part of life. In politics it’s the same.

In a world that is in kayos, millions being infected and death now accepted as  the norm, some of our illustrious leaders are looking for blame.

Waisting  vital political oxygen on it where the focus should be on survival of their citizens shows they just can’t get away from their own personal politics of political survival first.

There will be plenty of time later to do the risk assessments and cause and effect processes but now it’s time  leadership and bi partisan behaviour at the highest level. The infantile behaviour of Trump trying to deflect his incompetence mirrors a Romper Room episode gone bad, yet it seems our government wants to join his sandpit as a show of lapdog solidarity.

We should stand with the adults in the room and get on with sticking process that so far is saving lives but this movement by our foreign minister sends the cynics a clear message that we may follow America in trading our standards of protection off for capital gain regardless of lives lost.

We are a intelligent race us Aussies so let’s not get ahead of the game, beat the virus first then rebuild our economy and social structures with zest from the bottom up.