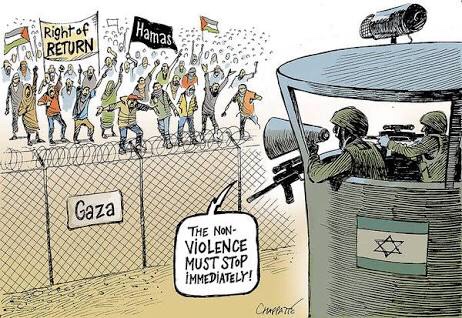 Why is it every time we see troubles in the Middle East, Gaza in particular Israel is always reported as the victim?

I saw people waving a flag shot by snipers, people running away shot in the back, yet Israel was defending itself from protesters unarmed protesters. No Israeli casualties reported.

Yes, Palestine does retaliate as Israel continues to expand and its become more evident Israel is not part or just plays lip service to any two state solution and Trump has supported that ideology within his embassy shift.

Make no mistake the move of embassy secured funding for his Republican Party and Netanyahu knows money reins supreme, and action the rest of world would regard as terrorism can be bought off by the threat giving or withdrawing currency, media outlets included.

If in any other place this latest Trump/Netanyahu decision outcome would be described as a massacre, but media outlets chose to totally downplay the deaths and show the nationalistic images of celebrations of new beginnings.

Ironical isn’t it thats exactly what Hitler did as he expanded.