No wonder the punters are totally sick of politics after the performance of the federal government of late but strap yourselves in as their will be more rot to come.

Bi elections and speculation of full federal elections will flood our airwaves but as painful as it will be we must be able to sort out the wheat from the chaff.

We will be subjected to fear campaigns on migration, climate, climate denial, religious freedoms, dole bludgers and the budget.,All the old tired cliches will be dragged out expecting us to swallow the baits again.

Its quite clear even the the most disinterested person the coup backed by the ultra right owned by big coal supported by the media barons saw fit to remove our PM. but was foiled by shear mathematics of democracy. The plan to hijack government was poorly executed by ideological thugs,ego driven with no regard of what our decision was at the polls.

We saw Rudd/Gillard fiasco 5 years ago and by giving the grass roots of the party a say stability has occurred much to the irritation of the same media that supported Turnbull’s demise.

Sooner or later we must get away from electing any PM by personality only. We have to look at who has the skills, be it black or white, male or female, who will. come equiped with policy that will help all Australians from the bottom up not top down.

The fixation on media cycle politics is destroying good sound government and someone has to put the media back in their rightful box ,a role to keep them honest and report the story and not be part of it. 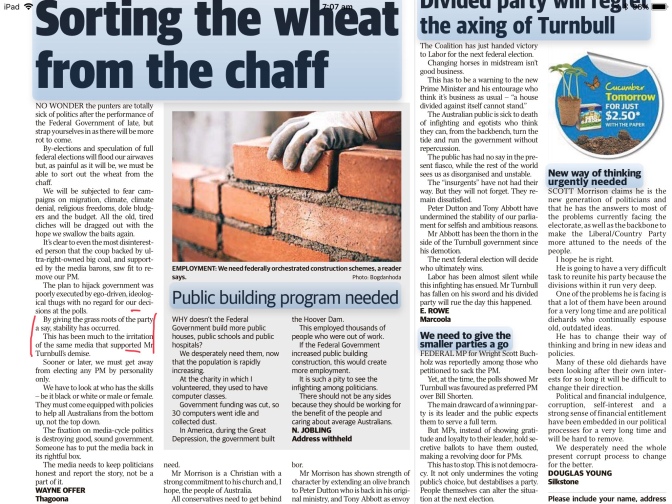 Ask the questions, and start the conversation, but never hide from truth and defend it. Mia San Mia. View all posts by Wayne Offer